Proudly serving the Greater Toronto Area
for more than 55 years. 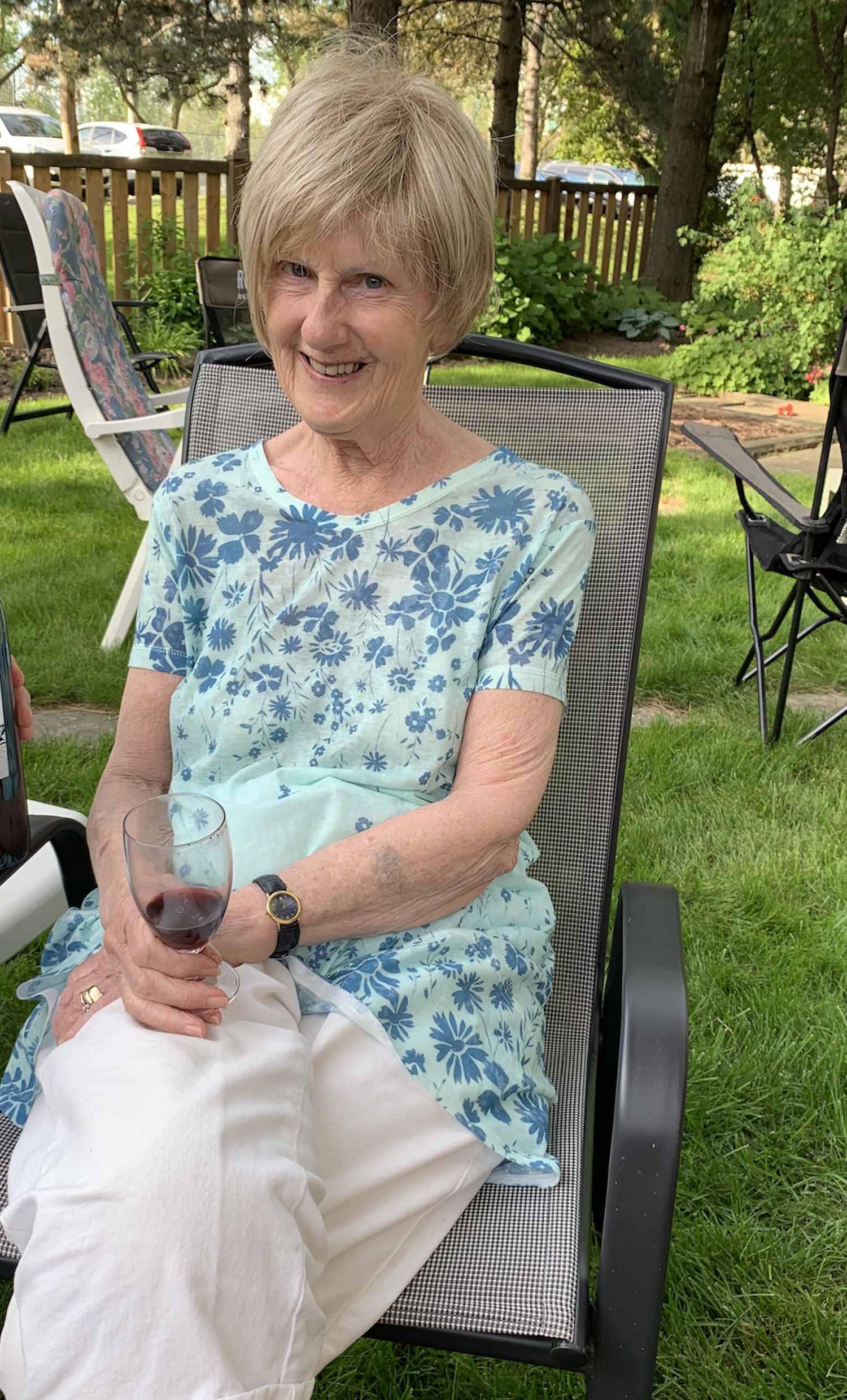 Senga took her last breath on Thursday April 30th, 2020, with her daughter Fiona by her side, in Leaside, ON. Senga was born on June 6, 1939, in Ayr, Scotland. Senga was diagnosed with Ovarian cancer on Thanksgiving 2018 and courageously fought through multiple surgeries and treatments. She was fortunate to spend her last few months with her family close by, and with a family trip to Florida in March. Our hope is that she’s now resting with her husband, our dad, Barrie Gray who died in July 1999. Senga was a loving wife, mother, gran, companion and a true friend to many. She will be forever missed by her son Nigel, daughter Fiona, (Brandon) and grandchildren Ashley (14) and Myles (7), her partner, Michael Greenwood and her former daughter-in-law Chantal. Senga is survived by her sister Avril Maginness in New Zealand and predeceased by her brother Sandy (Alexander) Hall, Scotland.

After Senga arrived in Canada, she met Barrie, who had come from England. When he proposed she took 3 weeks to give him an answer! They married on April 25, 1964 and bought their house in Don Mills. The family enjoyed sailing at ABYC in Toronto on various sailboats they had over the years. She enjoyed watching Barrie, Nigel & Fiona sail with the Mirror Dinghy Group which lead them to camping across Ontario and spending three weeks every summer at Killbear Provincial Park. Senga and Barrie were actively involved in many aspects of Glenview Presbyterian Church, from teaching in the Sunday school, to the Couples Club and ultimately as Elders. Senga spent many days baking and making scotch eggs and other refreshments for Glenview with the many good friends she made there.

Senga was an avid supporter of her children, Nigel and Fiona in their triathlon and coaching careers, and with Nigel’s business NRGPT. She would happily join them on their various European trips and Florida training camps or follow them around the world to watch their many races.  She traveled to Italy, France, England, Spain, Brazil, Lanzarote, Hawaii, Florida, Lake Placid, BC and Quebec to support them. At the 2006 Ironman World Championships race in Hawaii, Senga met Mike and so began a 14-year companionship which included spending time in Florida and Maine where Mike lives, and lots of travel. Senga was also very involved in her granddaughter Ashley’s and grandson Myles’s activities, which included many soccer games, track, karate, and school events. She enjoyed watching them grow and being involved in their lives.

Senga will be dearly missed at family gatherings for Christmas, Easter and Thanksgiving shared with our dear family friends, the Harpurs – not to mention her weekly coffee and dinner get-togethers with her many close friends.

Senga was involved with the Don Mills community where she lived for 54 years. She was a talented bridge player participating in many local bridge clubs in the Don Mills area and in Fort Lauderdale over the years. Scottish Country dancing was another passion of hers. She danced with a Toronto group, and in Edwards Gardens park each June on Tuesday nights as well as with a fabulous group in Fort Lauderdale.

Most of Senga’s working years were at Bell Canada or ‘maBell’ as it was known to Senga and her co-workers, where she was a service rep. Although, she seemed to have a ‘love-hate’ relationship with maBell, many of the connections she made with her co-workers became life-long friendships.

Senga did not let her battle with cancer slow her down.  Her resilience kept her active and she continued to walk with friends, as much as she could, counting her steps on her iPhone, aiming for 1-3km per day.

Her dedication to her family and friends knew no bounds. Senga was a kind, caring and thoughtful person who touched many lives over her 81 years.  Mum, we love you and we miss you. You will forever be in our thoughts and hearts. 💙

The family wishes to express their appreciation for the kindness and compassionate care the nurses and doctors gave Senga from the Temmy Latner Centre for Palliative Care (through Mount Sinai Hospital). Please consider a donation in Senga’s memory to Ovarian Cancer Canada or the Temmy Latner Centre. https://ovariancanada.org/Get-Involved/Donate/In-Memoriam-In-Honour

The family will host a funeral service in the Fall when socially acceptable at Glenview Presbyterian Church in Toronto. Condolences and sharing of memories can be sent to rememberingsenga@gmail.com 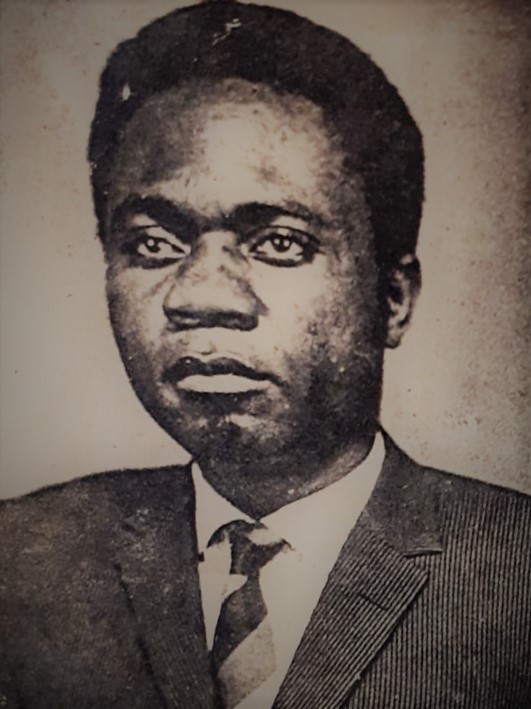 He graduated in 1954 from the Government Boys School, Accra. His aspiration to pursue higher education was not feasible due to financial constraints. He was trained as a tailor, and subsequently employed at a privately-owned tailoring company at Sualaba, a suburb of Accra, Ghana. He also provided tailoring services in his home in Accra Ghana, until he migrated to Canada in 1970.

Emmanuel completed multiple courses at the University of Toronto-School of Continuing Studies in the early 1970s.

He was employed by the Canadian National Railway until his retirement.

Emmanuel was a very generous man and lived a simple life. He was always eager to help various members of his extended family. He had a very good memory, even after living 50 years away from his native Ghana. He remembered details of all his extended family members, and kept up to date on international events. He would forward mail clippings of updated research articles from journals relevant to each recipient’s profession, on quarterly basis.

He was passionate about the Arts and Drama, and sometimes participated as an actor, or as a lighting technician.

Emmanuel is survived by his sisters: Elizabeth Akaawa Afful and Margaret Kabuki Nartey, of Accra, Ghana. He was preceded in death by his parents: Bruce Afful and Sarah Parker Allotey of Accra, Ghana, and by his brothers: Samuel Kweku Akaa Afful, Isaac Ayensu Afful, and Eric Kpakpo Hoffmann.

May the soul of Emmanuel Oseku Afful rest perfectly in the peace of our Heavenly Father. 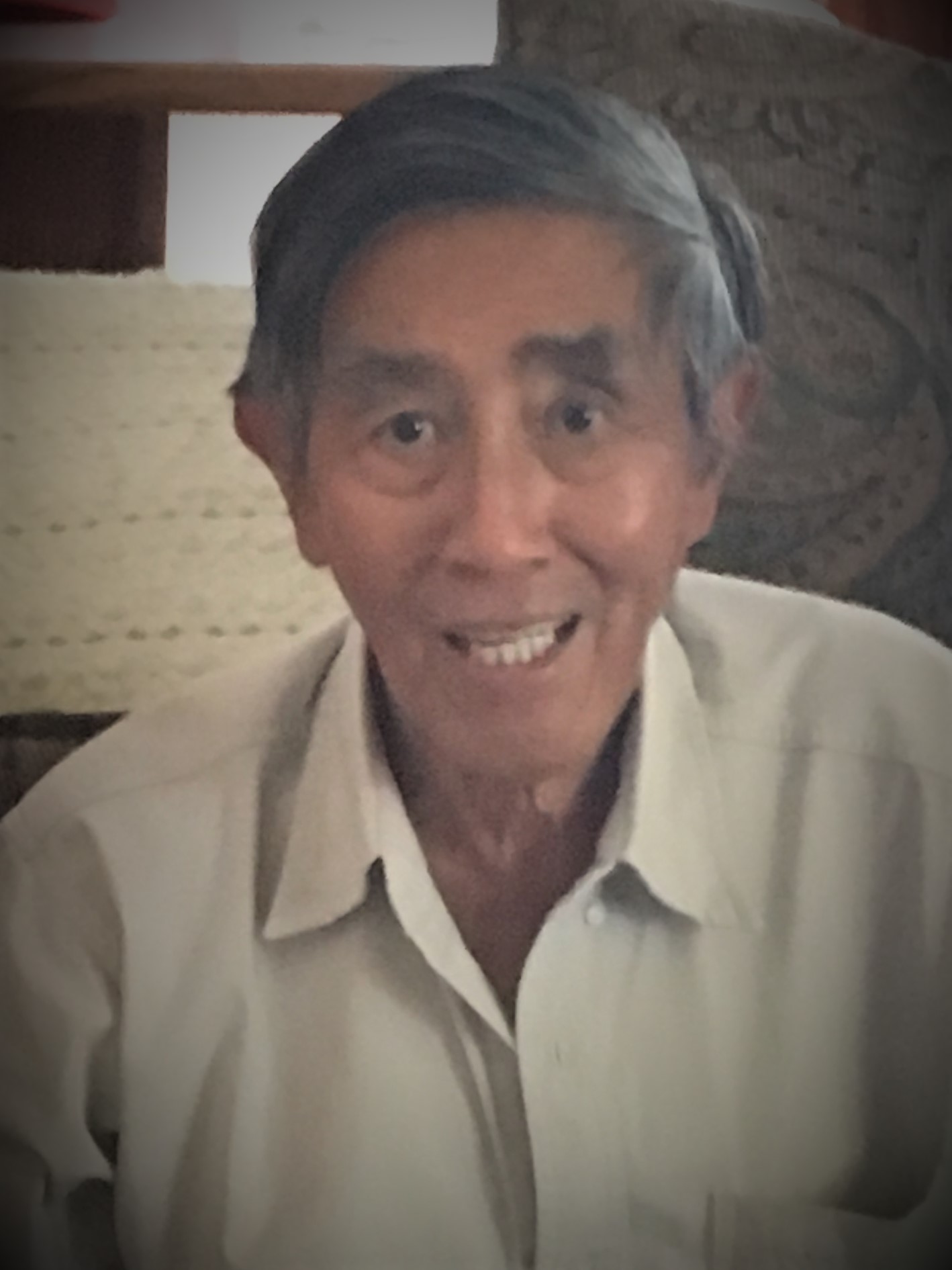 Tom passed away peacefully on Friday May 15, 2020 at Chartwell Aurora Long Term Care Residence at the age of 79.

Predeceased by his beloved wife Lilly Pingyin (Hong). He is lovingly remembered by his 2 daughters Barbara and Alison (Brandon) and his 4 grandchildren, Kiara, Ryanne, Graeme and Cuan. Tom is sadly missed by his sister, brothers, sisters-in-law, brother-in-law, nieces and nephews and all his extended family and friends.

Dad was very proud of his grandchildren. He would always whip out his photos of them and show them to anyone who would look. He asked every hockey team who visited his home if they knew his grandson or had ever played hockey with him. Every high school kid who did a co-op at the home was grilled about knowing his granddaughters too.

Dad had many interests, among them cars, fishing, music and pistol shooting. He was an avid collector of belt buckles, shoes, fine clothes, knives, guns and watches! He was very knowledgeable on his many interests and he loved nothing better than to discuss them with anyone.

He loved his home at Chartwell, he knew everyone’s name and everyone knew him! He was a big supporter of the home and would somehow coerce everyone passing by the tuckshop to spend every bit of change they had. He thoroughly enjoyed the many varied activities at the home. It was impossible to find him when visiting him at the home as he was a social butterfly visiting everyone and getting them to participate in the activities.

As much as we will forever miss and cherish our memories of Dad, after 19 years he is finally reunited with Mom.

We would like to thank Chartwell Aurora for the love and care they gave Dad. He was very happy living at the home and he made some wonderful friends and memories there. We also extend a big hug and heartfelt thank you to all the family and close friends who visited, called, cared for and supported Dad and us. 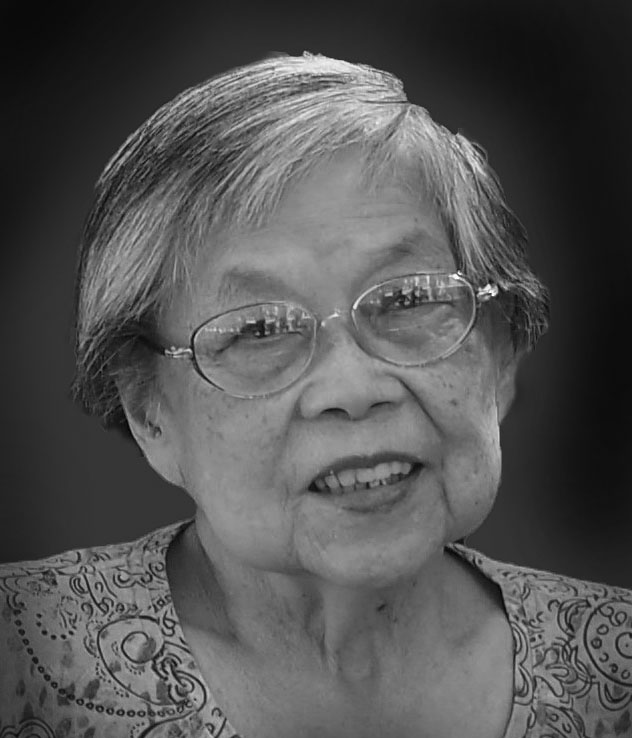 Anna Lee was a remarkable, individualistic, caring woman who was a pioneer in many ways.  Born in Windsor, Ontario, on March 17, 1929  to Ping and Lena Lee, she graduated with a University of Toronto B.Sc. in Chemistry 1952, one of only five women in Science that year and one of two in Chemistry. She worked in Windsor for the family business, Dragon Brand Foods, one of the first Canadian Chinese frozen food producers, until 1965. The next venture, Oriental Commerce Ltd., developed export ties with the People’s Republic of China in 1966, to sell Chinese giftware at the family’s Oriental Centre in Windsor and wholesale across North America including to Eaton’s, Pier 1 Imports and the Royal Ontario Museum gift shop. Oriental Commerce had the honour of arranging the first official Chinese government-sponsored Chinese Cultural Exhibition at the CNE in Toronto and maintained exhibits and sales for 10 years afterwards. In 1985, Anna became a real estate broker in Windsor and Toronto. She moved to Toronto in 1989 to live with brother Fred for 8 years, then in her own condominium until moving into assisted living at The Annex in 2011, then Wellesley Central Place in 2013.

Anna travelled widely, to almost every continent. Of note, in 1966, she was among the second group of Canadians (including father Ping and brother Fred) to visit China after Chinese Communist Party rule was established in 1949.

Cremation has occurred. A celebration of life will take place at a later date. Donations in Anna’s memory can be made to a charity of your choice.

Anna’s Chinese name, Lǐ Měi-Yīng (李美瑛) given to her by her father, Ping Lee, reflects the beauty, strength and integrity that was a hallmark of her life. She passed on April 25, 2020, age 91, in her home, surrounded by the love and caring of family and friends, leaving many beautiful memories. We are grateful for the diligence and attentiveness of the staff at Wellesley Central Place. Peace be with all who hold her dear in their hearts. 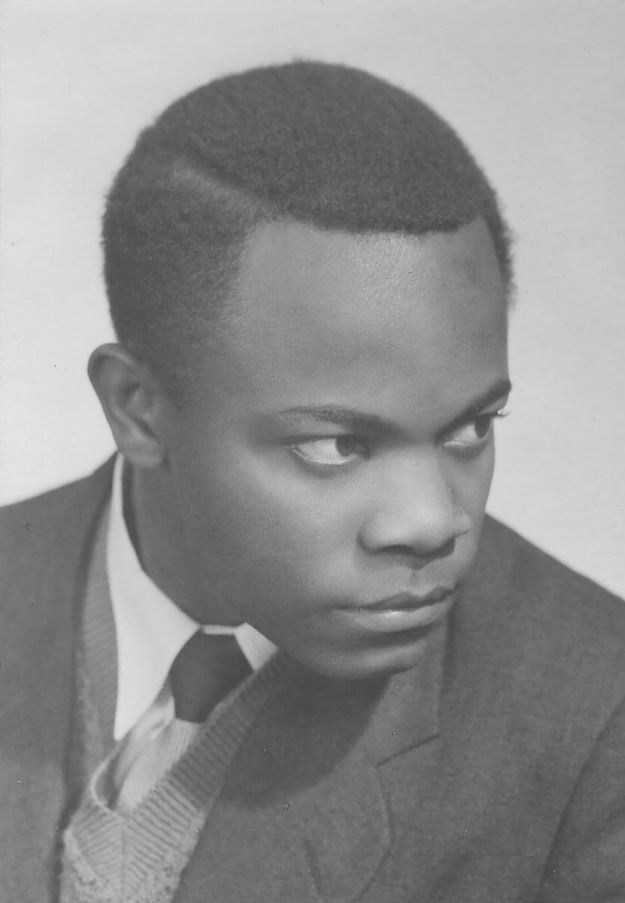 Mac passed away peacefully at North York General Hospital on Sunday 10 May, at the age of 93.
Beloved husband of Grace Regis (nee Alexander) for 60 years. Devoted and proud father to Alec Regis (Sarita Diaram). Dear brother-in-law to Marie Alexander and uncle to Ian Alexander (Cynthia Arcato) and great-uncle to Kaia Alexander. Much loved uncle to Gloria Hussein and great-uncle to Tracey Baptiste and Junior Hussein. Fondly remembered by Rosalie, Gloria and Traci Melchor, Francis, Trudy and Joanne Leonce. Brother to Alfred, Veronica, Edith and Winnifred Regis.
Mac grew up in the small village of Siparia, Trinidad & Tobago. In his teens, Mac worked in the oilfields and later trained and worked as a draftsman at the Red House in Port of Spain. Searching to expand his horizons, in 1955, Mac ventured to England by boat and studied at the London School of Economics, earning a degree in Economics. Shortly after, Mac met the love of his life, Grace Alexander, and they’ve been married ever since.
Mac and Grace immigrated to Canada in the late 1960s and lived in Guelph, Chatham, Kitchener and Sudbury before retiring in Toronto. They adopted their only son Alec in 1971, showering him with love and devotion.  Mac went on to earn a second degree from the University of Guelph and spent most of his career in Commercial Banking.
In retirement, Mac was an active member and Treasurer/Vice President of the Leaside Lawn Bowling Club. Mac suffered a severe stroke at the age of 84 and struggled with aphasia for the remainder of his life.
Mac will be missed by all who were fortunate to know him.
Special thanks to the amazing doctors, nurses and staff at North York General Hospital 8th Floor SE ward who cared for Mac in his final days.
If desired, memorial donations would be appreciated to the Aphasia Institute. 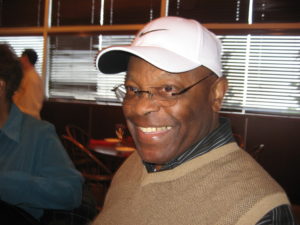