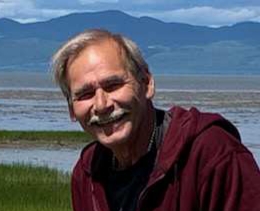 Norman Nicholls was known as The Miracle Man after he survived a serious heart attack on his way to his office on January 20th. A heart full of kindness helped him survive complicated surgery, rebound with rehab and return home on March 31st, ready to begin a new life. He’d written a piece each morning at Bridgepoint describing the emerging of the light and his joy at being alive and loved.

When his recovery seemed to stall, tests on Canada Day revealed advanced lung cancer which took his life on July 14th, surrounded by shocked and saddened members of his family and friends.

Norm was a survivor. Born on February 20th, 1952 in Timmins one of 6 children of Joy Juliff and Harry Nicholls. He and his siblings were separated in a series of foster homes, reuniting as adults. Despite this difficult start, Norm loved and valued his parents, with compassion for their difficulties. His relationship with his brothers Clarence (died in 1999), Alfie and Bob and his sister Lynn were a source of great comfort and joy and he kept in close touch once the connections had been made. Unfortunately his sister Carol died as a child. A highlight was joining Bob and his wife in their camper last summer to visit Lynn in New Brunswick and meet her four sons. Norm adored Clarence’s daughter Karen and her daughter Anastasia (Annie) who were a constant presence in the life of their Uncle Norm.

Norm’s work history reflects his varied interests and talents. From dancing in a club on Spadina as a teenager, working in the office of an MPP and at the Playwrights Guild of Canada, managing the opening of the Isabel Bader Theatre at Victoria College to his last administrative role at Moneris, he always performed with enthusiasm and creativity even if it wasn’t his dream job. He brightened the Elections Canada office on many occasions with his wit and energy, as well as doing a good job.

His long term relationship with Ross Skelton took him to New York City for most of the eighties where they lived in a railway flat and worked as court reporters, taking acting classes in their spare time. Ross’ death in 1988 shortly after their return to Toronto was a blow that deepened Norm’s appreciation of friends.

His love of music was born early and sustained him throughout his life; his beautiful voice was a source of pride for him and joy for the rest of us. He’d downloaded a composition program and hoped to devote some of his time after finishing work to composing music and singing in a group. He also planned to donate time to the Heart and Stroke Foundation in appreciation of the help he’d been given.

And friends, Sue and Ken in England, and in Toronto, Heather and Don, Del, Wendy, Julia and John and all the people who spent many Christmases enjoying Norm’s company…and his shortbread cookies.

He’ll be missed by many people for his songs, his generosity, his jokes and his kindness which will live in our hearts always.

Due to the constraints of COVID 19 a small memorial for family and close friends will be held at Manor Road United Church in Toronto on Thursday, July 23rd, 2020 at 7pm.

A graveside service with be held in Timmins with close family at a later date.

In remembrance of Norman please consider donating to the following or a charity of your choice.Heart and Stroke Foundation
https://www.heartandstroke.ca
Black Lives Matter
https://blacklivesmatter.ca