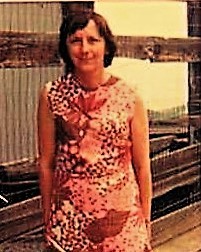 Born September 5, 1934 – Died October 22, 2016
Mary-Adele Mills passed away on Saturday, October 22, 2016 at Bridgepoint Hospital after a long battle with lung cancer. She was 82.
Adele (her preferred name) was born in Big Valley, Alberta. Her parents were Michael Bowra and Joanna Martha Bowra (nee Westphal).
Adele was one of four siblings: Walter, Adele, Vicki and Edward. Walter died in 1959 saving the lives of five people and Edward had a sudden heart attack as a young man. Adele is survived by her sister.
The Bowra family lived on a farm in Alberta. When Adele was ten years old, the family moved to Toronto.
As a young woman, Adele worked in various offices as an executive secretary.
She joined the Royal Canadian Air Force (RCAF) in 1952 working in the recruiting office for air pilots. She greeted wannabe recruits and put them at ease before administering the standardized tests of the day, and recommending suitable candidates. She left the RCAF in 1955.
In 1955 to 1957 she worked again as an executive secretary.
Adele went to New York City to study stenotype from 1957 to 1959. She worked as a court reporter in Kingston, Ontario in 1960.
Adele married Christopher Mills on August 25, 1961 and they relocated to New Jersey. When Christopher got a promotion, they moved to New Hampshire.
In 1980, the marriage ended and Adele returned to Canada, moving to Toronto to help care for a sick relative.
Adele’s own health began to deteriorate making it difficult to work steadily. She and her sister Vicki worked in the stenotype field and formed a working partnership that continued for 25 years.
Adele also became known as a court reporter instructor. Several students became court reporters, rapid text transcriptionists and closed captionists. They found work across Canada from Vancouver, British Columbia to St. Johns, Newfoundland. Adele experimented with techniques to make machine shorthand theory easier to learn. Adele stayed in touch with many of her court reporting students and took pride in their career successes.
In the 1991 StenEd Basic Theory, Volume 1 of Real-Time Machine Shorthand, Adele was acknowledged by author Beverly Loeblein Ritter: “… on revising the StenEd theory to make it even easier to teach and to learn while still remaining completely conflict free. Suggestions from … Mary-Adele Mills, Toronto, Canada … gave us the inspiration we needed to complete this project.” She was the only Canadian instructor of 11 identified by name in this textbook.
After retiring, Adele enjoyed walking and shopping in her local neighbourhood, reading current affairs, and drinking coffee and doing crossword puzzles with her friend Frank.
Adele is survived by her sister Vicki Bowra; great niece Jennifer and her husband Kenneth Derr and their two sons; Frank Cardoni, Sandra Lotz, Janis Daly and others.
A big thank you goes out to the Palliative Care Unit at Bridgepoint Hospital where Adele spent her final month.
Donations can be made to the David Suzuki Foundation at http://www.davidsuzuki.org/ in Adele’s name.
Adele was very matter-of-fact about facing death. She had a strong faith in the natural universe and the creator. She had a smile that could light up a room. With much peace, Adele, we love and miss you always and forever.