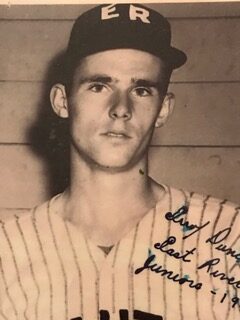 Errol Hetherington Duncan was the youngest of six children born to Scottish immigrants from Aberdeen. Errol developed an early love of sport and excelled in every sport he played. A baseball pitcher, he was invited to play for six major league teams but ultimately turned them all down to look after his mother, who was widowed when he was a child. Errol threw fastballs well into his seventies and helped his team win both the 2007 and 2008 Canadian “old-timer” championships.
Errol was a proud chief caretaker for the Toronto Board of Education and later became a supervisor overseeing 60 schools. It was in a school gym when he first heard someone playing bagpipes; it was his future wife Helen, a PhysEd teacher and private pilot. Errol and Helen married in 1963 and had two children, Kirsty and Christopher, with whom they shared their love of sport, travel, and the outdoors. A devoted family man who supported his children in every way, including nightly driving to diving, gymnastics and highland dancing.
Errol leaves behind his beloved wife Helen, daughter Kirsty, son Christopher (Cynthia), step-grandchildren Isabella and Lily, cherished sister-in-law Jen, and many loved friends. Errol had a wonderful life, loved his family unconditionally, and instilled in his children the values of hard work and service, a passion for sport and a love of all-things Scottish. Dad, you were our everything. We hold you in our hearts until we meet again, and we trust the pipes are playing you home. As an expression of sympathy, a donation may be made to the SickKids Foundation. As per Errol’s wishes, cremation has taken place.

Offer Condolence for the family of Errol Hetherington Duncan