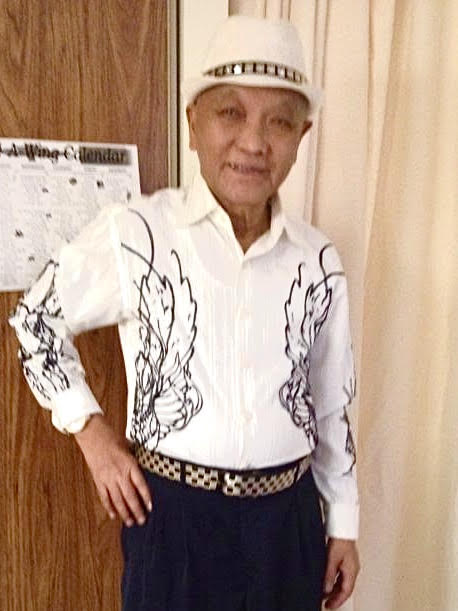 It is with great sadness that we announce the passing of Amado Tolentino on July 17, 2020 at the age of 85.  After several months of declining health, Amado died peacefully at Kensington Gardens Long Term Care Residence with his beloved daughter by his side.

Amado was born on January 5, 1935 in Burwanga, Aklan Philippines. In search of a better life, he immigrated to Toronto, Canada in 1967. He started working at St. Michaels’ Hospital where he worked in the Emergency Department and eventually in the PACU.  He was a proud Filipino Canadian who took great pride in singing O Canada at any given moment, even if he saw it on TV during a hockey game. He would wear a little Canadian flag or a red maple leaf on his lapel. He retired in 1997 after 30 years of faithful service to St. Michael’s.

Amado’s passion was in his faith in the Lord, calligraphy, ballroom dancing, yodeling and his balloon decorating business when he retired. He would strike up a conversation with a complete stranger, create their name in calligraphy and give it to them for free. He always carried around different colored pens just in case. His love for art and drawing were showcased in the intricate balloon designs and signs he would create. He once said that if he didn’t come to Canada, he would’ve went back to school to take graphic design. Amado was never shy about yodeling his favorite songs.  He had many friends who knew him for his warmth and generosity. He would give his shirt off his back and money in his pocket if he knew the person was in need, friend or not. He was well known in the Filipino community as Mr. Tango, and if given the opportunity to do one thing it would be to ballroom dance on any given day, all day, everyday.

He was a very proud father, grandfather, brother and uncle. He would talk about his daughter and grandsons and show pictures to anyone who would look. He enjoyed telling childhood stories to his grandsons especially how to catch octopus using hermit crabs! He was especially proud that his daughter followed in his footsteps into the healthcare profession and would tell anyone who would listen.  He loved to dance and have parties with his sisters and enjoyed spending time with them and with the rest of his nieces, nephews and extended family.

He is lovingly remembered by his daughter and son-in-law Jennifer and Michael Lakos and his grandsons Julian and Matthew of Linden, Michigan USA,  his sisters Lucy Paragas and Anita (Roger) Tupas of Scarborough ON, Sol Barrientos of Aklan, Philippines and former sister-in-law Crisanta Pasigan of Toronto, ON. He will be greatly missed by all his nieces, nephews, extended family and close friends. He was preceded in death by his father Honorio Tolentino and his mother Anacorita Sualog, brother Juanito and sister Elena.

A celebration of his life to be planned at a later date in Toronto when COVID restrictions allow.  A memorial Mass will be held on August 30, 2020 at 8:30 am at Precious Blood Catholic Church. His cremated remains will be brought back to his hometown in the Philippines as per his last wishes.

Offer Condolence for the family of AMADO TOLENTINO